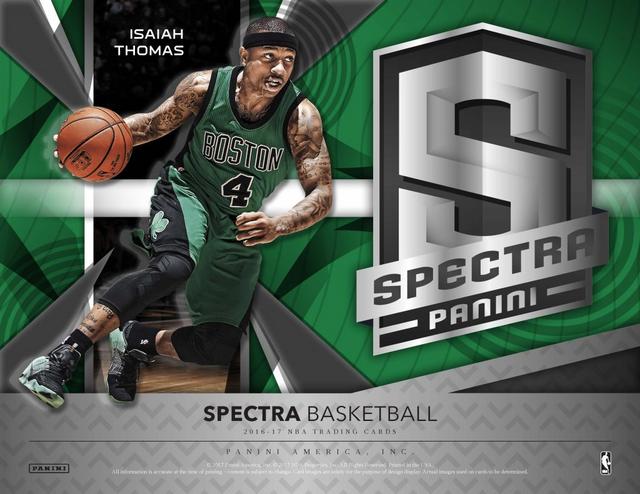 Over the course of its first few years in existence, Panini America’s flashy Spectra franchise has often blown fans
and collectors away with a litany of colorful calling cards and deft utilization of the company’s still-captivating Optichrome printing technology.

It’s been a winning recipe rife with big hits for the last three years . . .
and it’s a recipe worth repeating (but with a few new twists).

Set to arrive in mid June, 2016-17 Panini Spectra will deliver, on average,
seven autograph or memorabilia cards in every 10-card box (six boxes per case).

Every autographed card in the product features a piece of memorabilia and a chase-worthy ensemble
of parallels, including the all-new Nebula 1/1 version.

- Global Icons Memorabilia Autographs showcasing 15 of the most popular NBA players from around the world.

- Calling-card Rookie Jersey Autograph gems honoring members of the 2016-17 NBA Rookie Class
and featuring on-card autographs, base versions numbered to 300 or less and parallels numbered to as low as one.

2016-17 Panini Spectra returns to the hardwood with the same lustrous designs and color parallels fans and collectors expect.

Though, the premium release takes the Opti-Chrome set to another level by adding a jersey swatch relic to every autographed card.

Options include Spectacular Swatches Autographs, and the Rookie Jersey Autographs (#/300)
is highlighted by hard-signed cards, including the Gold parallel.

Each of these, of course, features numerous parallels choices, including a one-of-one patch Nebula parallel.

As expected, both past and present NBA stars, as well as first-year players are adequately covered.

Collectors can expect a wide array of colored and jumbo prime parallels in 2016-17 Panini Spectra
to be sequentially numbered, and as low as one-of-one.

The last NBA trading card product to be released during the season will be 2016-17 Panini Spectra,

which packs seven hits into a one-pack box.

Due to be released in mid-June as the NBA Finals are either winding down
or just ended, Spectra will bring its Opti-Chrome technology (shiny stuff) to each pack of ten cards.

Panini is promising that each autograph will have a relic as well and each will be serial numbered.
Look for plenty of parallels in the mix but exactly what they’ll be hasn’t been released yet.

Spectra will have specifically themed autographed sets with multiple parallel versions, jumbo-prime swatches,
and a mix of current, retired and rookie NBA players on the checklist. Among them:

Base Rookie Jersey Autographs will be numbered to 300 with Gold
and other parallels as low as the 1/1 Nebula versions.

Panini promises all Rookie Jersey autos will be signed directly on card (no stickers).

Global Icons will feature a checklist of 15 players who hail from other countries.

Spectacular Swatches and Locked In are two other subsets to look for.
Each case of Spectra will include six boxes (60 cards total).

Fans of Panini America‘s Optichrome technology have come to appreciate the dazzling designs that are the hallmark
of the company’s Spectra brand and the latest edition, 2016-17 Panini Spectra, will be hitting stores in mid-June during the NBA Finals.

With 10 cards per box, breakers will get at least seven autograph or memorabilia cards inside.

Be warned, though, it may be a good idea to put on some sunglasses before opening as these cards are going to shine
with a rainbow of parallels that is tough to beat.

Base Set and Parallels

Preliminary sales materials for 2016-17 Panini Spectra did not give any specific details regarding
a base set, but one is expected.

Panini Spectra Rookie Jersey Autographs are definitely going to be back again, of course,
and they are numbered to 300 copies each in addition to being hard-signed.

The Rookie Jersey Autographs will have parallel versions including Gold
and the one-of-one Nebula which feature patch pieces.

Expect these and the base cards to also have additional parallels.

Every autographed card in 2016-17 Panini Spectra contains a memorabilia swatch
and all of them are sequentially numbered.

All of these sets have a wide array of parallels which can include jumbo and prime swatches
with production numbers as low as one-of-one.

The Basics : Among the finds in this one will be Spectacular Swatches, Global Icons (15 top international players) and Locked In.

Each will have a number of parallels Neon Green, Gold, Green and 1/1 Nebula among them for past and present stars.

Rookies will have on-card autos with a basic jersey auto starting at 300 copies per along
with several parallels per player.

- 7 Autographed or Memorabilia Cards in Every Box!

- EVERY Autographed Card in the set features a swatch of memorabilia
and parallels, which are sequentially numbered all the way down to a One-of-One Nebula parallel!

- Collect this latest rookie class the way you want! EVERY Autograph is signed ON-CARD,
and every player boasts a base version #’d to 300 and parallel versions numbered all the way down to One-of-One!

- Global Icons Memorabilia Autographs showcases 15 of the most popular NBA players from around the world!

We’ll have plenty more on 2016-17 Panini Spectra in the coming weeks right here on The Knight’s Lance.

But for now, enjoy this extended first look :

With the 2017 NBA Finals set to get underway Thursday night, an international audience promises
to be glued to the third straight showdown between the Cleveland Cavaliers and Golden State Warriors from the opening tip on.

So as we anxiously await Game 1, we wanted to offer something to help pass the time.

We’ll have a comprehensive Quality Control Gallery for the unique 2016-17 Panini Studio in the coming days,
but we figured an early glimpse at some of the memorabilia gems planned for 2016-17 Panini Spectra might hit the spot today.

In the gallery that follows, we sneak a peek at some of the prime-memorabilia parallels permeating Spectra’s Spectacular Swatches,
Triple Threat, Catalysts and Next Era inserts.

Enjoy the gallery and stay tuned later this week for an extensive preview of 2016-17 Panini Studio .

Is it just coincidence that this latest showcase of Panini America’s newest on-card ink arrives today, the official first day of summer? Probably.

Nonetheless, after seeing the hard-signed stunners that follow, there’s absolutely
no denying the heatwave of hits in store over the next several months.

By the way, we’ll have a complete Quality Control Gallery for 2016-17 Panini Spectra tomorrow. Stay tuned.

No matter the year, no matter the sport, Spectra continues to impress with each new release, bolstered from the beginning
by an irresistible combination of colors, content and construction.

So as the company prepares to release 2016-17 Panini Spectra next Wednesday, it should comes
as absolutely no surprise that the key brand tenets return vibrantly intact.

On average, each box of 2016-17 Panini Spectra Basketball will deliver two base cards,
one parallel, four autographs and three memorabilia cards.

The new-this-year Nebula 1/1 parallel is a spectacular addition to the product and the usual arsenal of rainbow chases return
with their dazzling surface variances. Ink and prime-memorabilia specimens abound again as well.

You can get an extended sneak peek at this year’s release in the must-see Quality Control Gallery that follows.

Enjoy the imagery and stay tuned to The Knight’s Lance for continued coverage.